India is the world’s seventh-largest country by land area and the world’s second-most populous country. It is located in the southern part of Asia. The Republic of India is the official name for the country. The government in the country is in the form of a parliamentary system. It becomes challenging to manage a big country from a single location. This article contains a list of the Indian states and the capitals of each state.

List of Indian States and Capitals (in alphabetical order):

The following is a brief explanation of the differences between the various types of capitals.

Many people are unaware of the overall number of States / Union Territories in India and the locations of their respective capitals. This article will provide you with the most recent information on the Indian states and capitals. India currently has 28 states and eight union territories, for 31 states and eight union territories. Each state in India has a worth that serves as its administrative, legislative, and judicial center. Some states have one capital where all three processes are carried out. There is a Chief Minister in charge of each state. This section covers the list of Indian states, union territories, and their respective capitals.

State and local governments in every state and two union territories, Puducherry and the National Capital Territory of Delhi, are governed and governed by elected representatives. One Chief Minister is voted into office for just a five-year term and is in charge of the entire state. By the States Reorganisation Act of 1956, the government reorganized each state according to its language.

A final tally of 28 states and eight union territories make up the country of India.

According to the most recent census, India currently has 28 states and eight union territories. The former state of Jammu and Kashmir has been divided into two Union Territories (UTs), J&K and Ladakh, with the former state of Kashmir as the administrative center. The government established the newly created union territories due to a reorganization act on the 5th and 6th of August, 2020. India currently has eight Union Territories (UTs).

India’s States and Capitals are depicted on this map.

You can look at the most current political map of India, which shows the total amount of states and union territories in India and the locations of their capitals at the time of writing. 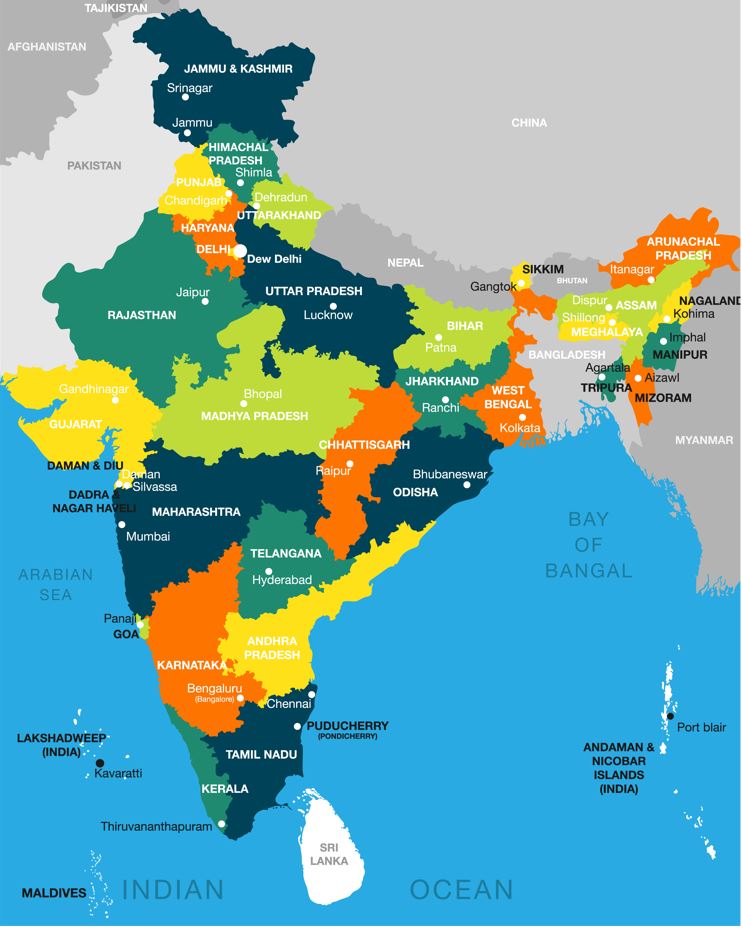 States and Capitals: Some Points to Keep in Mind

Please look at the most recent updates on the Union Territories and their capitals before continuing with our tour of the territories.

With the amalgamation of Daman and Diu and Dadra and Nagar Haveli, the number of Union Territories (UTs) has been reduced to eight.

In the year 2022, the Indian states and capitals will be reorganized.

As responsible people, we should be familiar with the names of India’s states and capitals. The conditions and means of the United States are frequently asked as Based Concept Questions in various competitive exams held throughout the country.

Q 1. What is the total number of states in India?
Answer: India is a federation of 28 states and eight union territories that make up the nation.

Q 3. Which territories of the European Union were merged in January 2020?
Answer : The union of Daman and Diu with Dadar and Nagar Haveli takes effect immediately.